so the last chapters has kinda been like a flashback from law when he was young whihc i really like since we kinda get to know a bit more about the celestial dragons and some other places in the one piece universe that i cant wait to see more off. but this chapter made me fcking crazy 😀

so as always this chapter told about laws and doffys past and we got to see a bit how doffys family got treated because they were celestial dragons which is kinda cool to see the people actually stood up to the fcking celestial idiots but i think doffys fater was born a celestial dragon and didnt like wanna be one of them because of their repetation so they moved away but they got hunted down in this chapter because people dont like the celestial dragons.

now we got to see that doffy wanted to welcome law to the family and then my theory about why alw is still alive almost got answered in this chapter since doffy said they could find a devil fruit for law so he would live and i think his doctor thing fruit helped him and that he cleaned his body of the disease or like put other peopls parts as his body or something. but anyway the shocking thing for this chapter was the freaking D.

at the end law tells baby 5 and that other guy his real name and omg, LAW HAS THE D in his name :O this is so awesome that he may be realted to luffy since we all know the big story about all these D people, all the big pirates and everything has D in it and one time we got to see a flashback with Gol D. Roger and whitebeard where Roger told whitebeard the meaning behind the D which means that this D actually has a story behind it. i think it is the line of D which was all big pirates and such and that they are all related in some way. but anyway we now got to see that this D is something you dont mess with ebcause Corason took Law and told him if he was a D he should go far away from dofflamingo right away. this means this D actually is something big and i think it is the line of these big and crazy pirates 😀 also you know Corason never talk or say anything but he talked to law in this chapter about the D thing :O 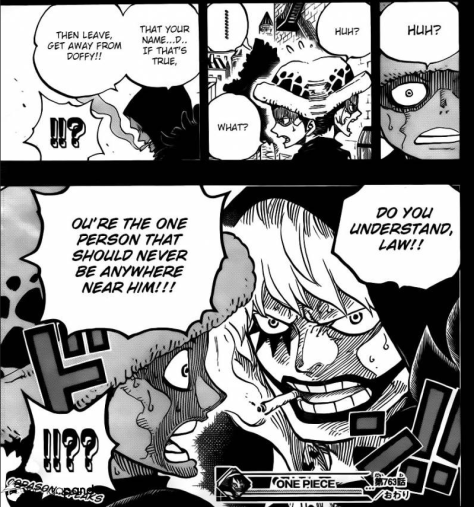 so tell me what you think about this chapter and if you have an opinion on this D. matter and i hope you all have a good day or night 🙂 see ya

also here is an amv about this D thing that ive seen many times, you should really watch it!

how many awesome people have visited?